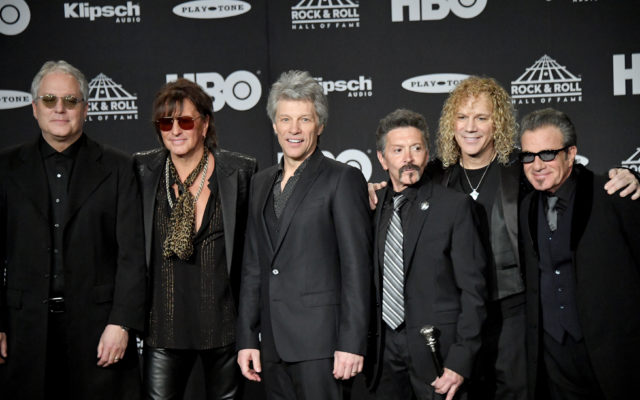 While at the historic studio, Bon Jovi, Harry, and two other wounded vets and members of the choir, posed for a photo op, recreating the Beatles‘ legendary stroll across the famed crosswalk in homage of the “Fab Four’s” 1969 Abbey Road album.

The Invictus Games were established by Prince Harry in 2014, with the competitions serving as the “only international adaptive sporting event for wounded, injured, and ill active duty and veteran service members.”

The recording session is among Prince Harry’s final official appearances, before backing away from his royal duties beginning on April 1st. Jon Bon Jovi chatted with People about Harry, saying, “In light of everything that’s going on right now, I’m happy that he could take the time to be here for the choir and make it happen. (We have) immense respect for the family and for his brother and himself, his wife, his father, his grandmother, his grandfather. We have much respect for them in America. That’s all I can comment on. I don’t know what it’s like to walk in his shoes.”

Bon Jovi went on to say: “I can’t really comment, I’m not really here. We see it on the news. It’s very different when you see soldiers at war on the news. People change the channel and then their minds aren’t on them. When we see things like what Harry and Meghan have gone through, we turn the channel off and things are over with. You don’t know what it’s like to walk in anyone else’s shoes.”

In salute to Bon Jovi’s work for the Invictus games, in a rare breach of official protocol, Queen Elizabeth‘s royal guard outside of Buckingham Palace performed a selection of Bon Jovi hits — including “Livin’ On A Prayer.”

While in England, the 58-year-old Bon Jovi chatted with Britain’s Metro, and joked about Mick Jagger and the Rolling Stones: “They are my absolute heroes, my favorite rock band. I am in awe but I wish the son of a bitch would retire just so I know where the end is.”

When pressed as to whether he  — like Jagger — would like to still be touring at 76, Bon Jovi said, “I hope not. My goal is to do it as well as I’ve done it or better, just not to hurt the legacy. Nobody loved the fat Elvis. You’re not going to see that with me. I’d walk away before that happens.”

Jon Bon Jovi appeared on England’s The Chris Evans Breakfast Show and shed light on how he first connected with Prince Harry prior to teaming up for the charity recording sessions: [“I wrote a song for a documentary, um, it’s about veterans with PTSD in America. But on a parallel course, I had sent him a letter back in August, with the lyric and the song before it came out in America. And I said it would be a great gift from me to the Invictus Games. And long story short — and who knew what was going to happen with him — he had said yes and now stuck to it. So we’re doin’ it. I’ve been askin’, ‘What do I do? How do I address him?’ — and the I realized I’m gonna call him, ‘The Artist formerly known as Prince’ (laughter).”] SOUNDCUE (:28 OC: . . . known as Prince’ (laughter))